I suppose I should take my banner down now. After all, I got what I wanted. He’s impeached. Nancy says impeachment is forever. Maybe it is. I don’t know.  I was hoping for something more in the way of Trump not being president than what we got.  My fantasy about him being perp walked out of the White House, and then sent to the World Court to be tried for crimes against humanity, with all of it resulting in an Old Testament resolution was never going to happen. In reality, I am willing to split the difference between that and him getting off Scot free. 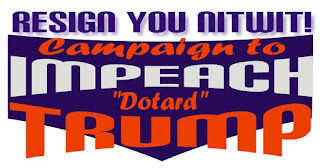 As of this writing, there is some chance of us suffering another four years of Trump. Mind you, I was counting on the baked in humanity of elected officials to remove Trump the first time.  Senators are exceptional people, even ones from Wyoming and South Carolina.  Surely it dawned on at least 60 of them that Trump is an unvarnished nut case. As my father says, self-interest trumps reason. I’m not sure in what world any number of Luddite judges and tax cuts for polluters and plutocrats somehow outweighs giving a monkey nuclear weapons. But here we are.

I have been protesting this, on occasion.  As is the lot of all true patriots, lately my protests have amounted to rewriting a superhero role-playing game.  It has recently dawned on me that the only tool for removing Trump is the Democratic Party.  Speaking as an authority on multi-function tools, my confidence is not inspired. It isn’t over yet, but things are not looking all that great.

I am convinced that we could beat Trump with a bucket of warm spit.  And I am willing to support the candidate who most resembles such. Many of my fellow Democratic Voters have higher standards, some slanting towards preference for a Giant Vampire Zombie. I don’t think we need to be quite so inclusive in our identity politics this time around. We might want to go with the closest Sane Human Being model available—if only to sway other sane human beings.

Although Trump is Conservative-aligned, he is not on any intellectual level a Conservative.  Sadly, Conservatives are water carriers for plutocrats and polluters, but there is a vocal third of them who can be swayed to support a non-Giant Vampire Zombie. At Trump’s core, he’s a bigot. He has that vote, along with the cadre of Bible thumpers, gun loonies, plutocrats and polluters that the Republican Party conglomerated over several decades. There’s no point in playing to any of them. But that still leaves a lot of folks, an overwhelming majority who are available to be tapped provided that they are NOT shaken to the point of viewing their electoral choice as being a binary between loathsome equivalents.

My own two first choices are out. Kamala Harris and Corey Booker did not make it to post time in Iowa.  I have since thrown money at Elizabeth Warren. I have a personal recommendation on Elizabeth Warren. People who know her says she’s brilliant. While Elizabeth Warren isn’t willing to write off Elizabeth Warren, I am. She now reminds me of every teacher I ever hated. I flirted with Bloomberg, until I saw him live fire. If only Bloomberg partially resembled his own advertising, he would be a walk in. Instead Bloomberg is the less pleasant version of what Joe Biden is—way past his use by date.  This doesn’t leave me with much, other than a predilection for not directly supporting any other candidate. I am voting for the winner of the Democratic nomination, Giant Vampire Zombie or not.

It should not be this interesting.