We are on tour hiatus for this month and are taking inventory of our learning experiences thus far. Planet Funk was a lot of fun and Davenport is a fine place to visit. As I discovered, there are several used bookstores still in operation in downtown Davenport. The next time I am in town I will make it a point to check a few of them out.

Iowa is its own universe.  I knew this from my last visit, way back when during my sophomore summer in High School, where I attended debate camp at the University of Northern Iowa in Cedar Rapids.  After that trip, I wanted attend college there, but it wasn’t in the cards. Iowa isn’t flush or lush and seems to be keeping its own time. It’s a well-maintained, out-of-date place. The people are Midwesterners with a slant towards the polite, charming, blunt, and vulgar in a seamless mix. Sentences can be separated by two ticks of silence without things seeming awkward. Give yourself to it and you get used to it. The whole place marches to its own beat.

Planet Funk, like CODCOM and  Windy City Pulp and Paper has become a general Fandom convention. They all are taking their cues from the big convention in San Diego. The focus shifts a bit but they are all doing a little anime, a little cos play, a little comic book culture, a little TV and movie fantastic.  The latest trend is in crafting—folks making stuffed animals, face painting, t-shirt vending, dice bags and cross-stitching.  Its also a forum for authors and a source of pin money for actors and retired athletes.

Programming at Planet Funk centered mostly on cos play and costume contests, which is very accessible. It’s fun to watch and I would estimate that about one fifth of the attendees were participating in some degree or another. A panel on “What is new in Cos Play—Foam!” was announced, causing Brian in the booth next to me to wonder aloud about the content.

My focus has been coming up with a method of promoting my game without going broke doing it.  To do this, I have to create a table that sells.  I have a nice inventory of comic books which helped make Windy City and Planet Funk less expensive. But I am a few moves away from being able to make this venture worthwhile.  What I have seen selling best are toys and (sometimes pirated) art. If I can produce a few 10 bucks a throw art works and obtain a toy or two no one else is hawking, I believe my venture will flourish.  I am using my off time this month to seek things out. 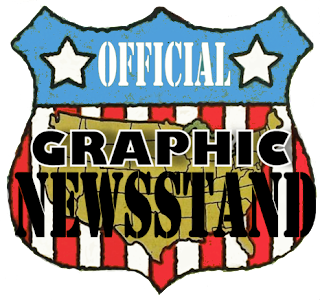 My fly animation is still in the edit stage. We would like to introduce the following website to the HIL-Gle family. GraphicNewsstand.com will eventually become my electromagnetic comic book shop and source for all things neo-pulp. Right now it’s a space holder. I will also be working on Vortex of Cute during the next few weeks.

This is the new ad for Weird Detective Mystery Adventures.  I am thinking of placing another ad in a few weeks and will announce it here. We will have a less hype-intense Internet Outbin in under a week. 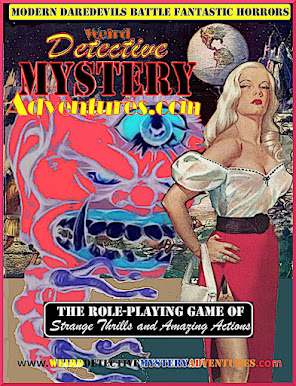