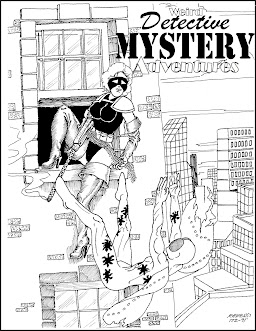 As Proof of Concepts go, my virgin attempt at gaming convention vending went better than I expected.  I did not become lost, drop things in puddles, cry, or set myself (or others) on fire.  That in my world is victory with anything I do for the first time. I especially dislike the blubbering, flailing around with my hands part, which is rather unbecoming a person of my august vintage and claims to stoicism. The mission was to get there, be on time, have the thing set up, conduct myself in a semi-professional manner, keep my ears open and learn what I can. The stretch goals were making a few connections, promoting the game, and perhaps selling a few games.  I may have overestimated the difficulty of the basics, but those are pass/fail items, the progression of which needs to be successful. All in all, it was all good news. The best part was the people I got to meet, from the fine collection of vendors to the members of fandom itself to the people who gave their time to make the event happen.

I have been to College of DuPage several times, however never during daylight hours or when actual students were present. My parents and some pals used to go to this Computer Club gathering, held back in the days before microchips became a commodity. It’s an impressive sprawl of mostly white-clad buildings in contemporary style. Most of the attendees at CODCOM were college students, either from DuPage or nearby schools. I am happy to report that fandom does seem to have an active and burgeoning youth faction. The show itself was a mix of animation fans, costume players, live action role-players, board gamers, tabletop role-players and video gamers. And there’s a lot of cross-pollination between these sects. Everyone involved was happy to be cohabiting the same space as their fellow man. With Covid potentially receding hopefully we will have more of this.

I had the good fortune of sharing vending space with Lon Lademann (and his two sons) from Fair Play Games as well as the husband-and-wife team from Space Gallery. Of special mention are…

Julie Swendsen and her husband Dennis Jones, who kept us all in a good mood. Julie has life entirely figured out. I would promote Julie and Dennis further, but their venture Illinois Jules does not have a website or a schedule. They had several tables of vintage fandom toys and ephemera which drew crowds. Julie figures that most people at game cons already have games and that they are most likely to buy fandom adjacent paraphernalia and trinket items. That turned out to be an educated bet.

Candace Rakow of www.CandiCoatedDesigns.com custom creates fantastic original dice bags in two sizes. Her design allows for the bag to lie flat when open so that you can easily pick out your needed dice without having to rummage. All of them feature two quality fabrics, one for the outside and one for the interior. She has an eye for popping textiles, too. As a side niche, she makes monsters out of yarn and is expert in costume design. Her and pal Jenny Mayton are also great salespeople—and nice folks!

Artist Joe Abboreno also had the fandom peripherals down pat. He was selling clothing, post cards and a great set of encounter cards—all with his own original designs on them. Joe’s works are striking and on gamer theme while maintaining the joy of life. The mix works. His fine line of materials can be found at www.JoeAbboreno.com. He also creates character portraits and was selling various character sheets, including one which folded like tent to show the other players what they could determine of the subject at first sight. Joe’s work is very inventive—and bright and colorful and fun. And Joe’s a great guy.

My own objectives were fairly narrow. “Making the table” and earning an immediate worthwhile profit was never going to be in the cards.* Instead, my primary objectives are publicity, fathoming interest and building up sales tradecraft. Strip this of pretext and I’m a shnook hawking a book. Shlepping my own designs from convention to convention is the default mode on this. In order to make that viable, I need more than one product. My thinking is that I would need to have six or seven—and they would all have to be at industry standard and look like something distinct. Right now, I have one product with an add on following shortly. Getting my other ideas in motion needs to take less than the two years that Weird Detective Mystery Adventures has. My penultimate goal is to have a network of retailers, which would also work best if I had more than one product. Either I am going to be a small press niche publisher or the modern incarnation of Lou Zocchi. It’s the same work. It’s just a question of scale. And I’m not either place yet.

"Everybody has a plan until they get punched in the mouth."—Mike Tyson

I didn’t get punched in the mouth. I’m mostly looking at good news. And I certainly need to improve on just the promotional and sales dynamics.

Product: There may be a reason there aren’t any comic book hero games currently in print. Fandom itself is a leading indicator not a lagging indicator. The fascination with everything super may have died out. I could have been facing utter disinterest. It’s a hard test to conduct. The game is derived from the fantastic subset of modern setting escapism. I’ve put the comic hero idiom up front and player activity is cast in the solver role. I consider all of Earth-bound science fiction my gaming domain. 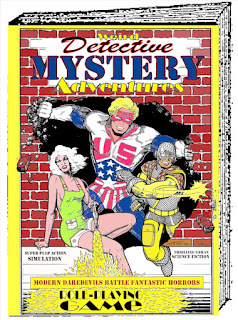 Weird Detective Mystery Adventures did not get laughed out of the room. Some fanboy with a homebrew thinks he’s gonna be a gaming mogul. Dodged that. The money I’ve spent on it shows. Weirdly my dated artistic sensibilities seem to be a plus as opposed to a detraction. The product screams Golden Age, but that’s not taken as negative. The crammed to the gills interior presentation works, too. I’m also retro as in retro-chic. Not broke. Don’t fix it. And the presentation is transportable.

Missses: I did not run a demo. I probably would have tripled sales had I just demoed the game. I tried to cover this with sales patter. Moreover, I didn’t know my pitch and I’m not as good as I need to be at giving it. Lacking a demo, I should have had an active sales portal on my website. And lacking even that, I should have had cards out which directed people to my websites (I have three plus this blog). Some of this I can rectify in the near term.

My sign is going to die before the tour is over. After no uses, it does not roll up right. After one use, part of it popped off. I will need a workaround for it becoming completely non-functional. The table liner left a lot to be desired also. Next time I go full color and not hand-adulterate my own logo just to save a few bucks.

On the other hand, the raffle idea went well and will go better if I push it a bit more.

Our next stop is Windy City Pulp and Paper Convention, where I hope to make the table selling comic books while also pitching Weird Detective Mystery Adventures to the pulp community.

Lon Ladermann is also the coordinator for the Polar Vortex convention in February.

*I did make the table, selling ten copies. I would say that it outsold every other game offered at the convention, but that is truly bragging about being the tallest midget.

Posted by Ajax Telegraph at 6:12 AM