Our biggest convention appearance yet is in the offing!

No, not Gencon.  As of right now, we will be running four demo sessions at GENCON, all on Saturday. When we have the slot numbers, we will release them here. The demo itself will premier at DIECON in Collinsville on June 4th and 5th. It is not a published scenario and will appear here on the Wonderblog after I have retired it. That said, we are not formally vending at Gencon, nor are we official guests of the con. Until I get the lowdown on how I can promote this, all I can say is that there will be several sessions of Weird Detective Mystery Adventures run in the gaming area on Saturday. It is not a progressive scenario. There is no need to sign up for more than one session. More on this later.

In some ways, it’s bigger than Gencon. In other ways, it’s somewhat off the mark as far as demographics are concerned.  A lot is going to depend on weather conditions, Covid, and turn out. They have taken my money. All I need now is a formal confirmation. It’s huge! It’s the one we wanted!

As you may recall, we intended to premier our Weird Detective Mystery Adventures masterpiece at the Windy City Pulp and Paper Convention but wound up hitting CODCOM first instead.  Windy City had booked solid, and we had to wait for a cancellation. Thankfully there was one and we got in. Our virgin effort at CODCOM was fairly good and Windy City was worthwhile on several levels.

My takeaways from Windy City. Most of the booksellers I spoke with are not interested in handling games—or at least those sellers who are sticking with brick and mortar. The majority of the vendors were moving online or were online exclusively already. Of my fellow publishers, few had any retail presence. Most of them were POD oriented or were shipping online themselves. Mind you, Windy City is more an antiquarian niche convention than a gaming convention, but the model used seems prevalent. This is making me question my retail stores first strategy. The retail strategy impacts consumer price because I have to leave meat on the bone for the store and various middlemen. It is the vig middlemen are demanding which is actually sucking the fun out of my project, since it seems to be on a cost plus sliding scale basis. As a certified contract manager, I am not signing a cost plus contract with anyone ever. Only arms merchants and hobby game distributors (and big box retailers) foist these gems on the unwary. All of this has given me some food for thought.  I did make some sales at Windy City and the comics we peddled covered the cost of the table.

Thanks to networking at Windy City, we expanded the tour to the Southside Comic Show. We may also have one other convention to announce besides the BIG ONE. Also thanks to networking at Windy City, Weird Detective Mystery Adventures will be running its first print advertisement in the Summer 2022 issue of Bachelor Pad magazine. You can check out its website at www.bachelorpadmagazine.com. 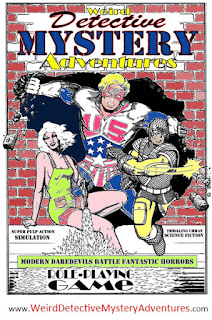 My pal Brave Sam will be joining us at DIECOM, manning the table while I am away doing demo stuff. I will let you know our table number when I can.

ALSO: WEIRD DETECTIVE MYSTERY ADVENTURES is going to be a MOVIE! Watch this space as details unfold.

Posted by Ajax Telegraph at 6:13 PM