The Wonderblog is now linked to an additional two new web ventures.  As threatened, Weird Detective Mystery Adventures now has its own promotional domain. We are also joined to Vortex of Cute, which is still in the developmental phase.

As I may have mentioned, the Hil-Gle website provider has abandoned the software I used to create it.  Further updates to the pages are now not possible.  My only option is to replate the pages by hand in a new package.  That may take some time.  Right now, I am focused on getting Weird Detective Mystery Adventures up to snuff as well as organizing its follow up.

Wonderblog is not primarily intended as a house organ for any venture, but rather as additive entertainment material.  There’s nothing wrong with house organ blogs—other than being not worth the investment in time for the reader. Our aim is to stay interesting and cover a select grouping of topics.

It’s still a work in progress and much will depend on the reception of the game.  Right now, it’s a hype bubble.  The aim is to make it a resource for players and judges.

As mentioned on the website, there will be at least one 500-page follow up to the core rules. On the optimistic side, this gives me a two-year product cycle, which is long enough to gauge the concept’s traction. On the pessimistic side, it keeps the game from being abandonware. I am about one third of the way through with the primary text at this point and should have it ready for release about a year after the new edition of the core game appears. Obviously, I would like to net a fortune from this, but I can scale things up or down, and be happy with the results in either case.

As Weird Detective Mystery Adventures is equivalent to the old D&D Player’s Manual and Dungeon Masters Guide, Warlords of Wonderworld is a combination Monster Manual and World of Greyhawk campaign setting. I am considering changing the name to Modern Thrills and changing the focus to being a resource for all comic book and pulp related campaigns. Again, a lot depends on the initial reception to the core rules.

I was more than tempted to change the name of the game itself to Modern Thrills, however in fifteen years I have not been able to obtain clean access to the web domain for that name. Without the web domain, it’s not worth scrapping whatever equity my game’s current title might have. (The lady who runs the Modern Thrills website has been at it longer than Hil-Gle has. In no way am I insinuating anything defamatory.) I also have plans for a Space Opera expansion to the system.

While I was channeling the Copy Writer gods for my hype blurbs on the new website, I stopped myself from including this…

All of the prime actors in the setting are either militarized or have access to fantastic abilities. (No unarmed gangsters here.) To this extent, our game slants more to the movie action hero detective or hardboiled detective than to the pedestrian police procedural, true crime, or deductive reasoning branches of the mystery segment. On the other end of the spectrum, Weird Detective Mystery Adventures lacks the context focus suitable for dystopia, space opera, high fantasy, or classic espionage. True crime and classic espionage are simply out of our scope. Space opera and dystopia are sideswiped in the core rules and are areas for future expansion. (As is high fantasy-- only as a subset of space opera.) While the game’s mechanics and resources are perfectly serviceable for space opera, dystopia and high fantasy, the core rules do not flesh out any specific aliens, monsters nor the backstory which these genre slices depend on. That said, the core gaming space is vast.

Weird Detective Mystery Adventures also does not do windows. And it doesn’t hurl fishbowls nor yodel. Yeesh! I am the Beatles’ Nowhere Man. I fear the 500-page quasi technical manual has become my artistic area of preference. (I would say expertise, but as I get more and more material back from my editor, I feel less and less expert.) It may require deprogramming, but at some point, I should go back to being a novelist. Or somehow revert to communicating in simple, declarative sentences before impending dotage spirits away what little relevance I have left.

The game is only one manual and has only one cover.  My posting multiple covers on the website was primarily for illustrative and promotional purposes. It is a form of advertising for the site. Illustrations like these are amalgamated and reposted on sites such as Google and Bing. Clicking on them drives traffic back to the main site. 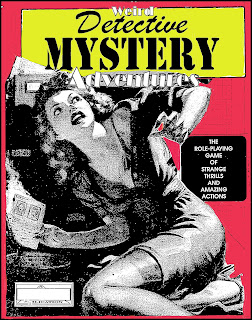 This is the cover of a previous short-run edition. It is intended as a tribute to the spot color True Crime magazines of the 1950s. As with most detective magazines of the era, it features the often-repeated Surprised Babe theme. The main art is a black and white capture from a full color painted illustration from Private Detective Stories, a Culture Publications pulp. It’s a gorgeous cover, although dubious on several levels. The original cover alludes to our subject having her arm wrenched, which had to be cropped off.  Its theme is a form of cheesecake and probably not suited to a general audience role-playing game. Also, it doesn’t reflect a game which spends 2/3rds of its text explaining supernatural events. I’ll confess that the attraction here was in how well the composition came off—and the economy of using spot color on the cover. Me and about five other people may have appreciated the historical allusions. 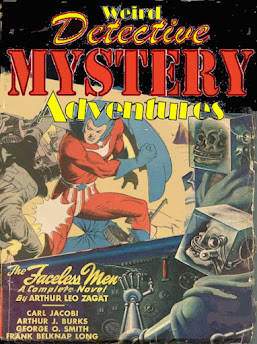 This is a piece of concept art. It’s a badly executed bit of GNU manipulation by yours truly. The original theme was lifted from an old Thrilling Wonder Stories cover. My intention is to have this redrawn entirely.  I believe that the cover of Warlords of Wonderworld should look something like this. Below is our working cover for the expansion. 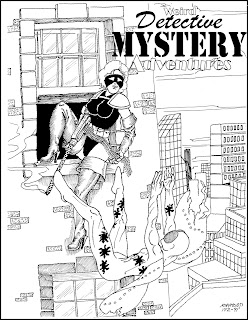 I love this cover, just as I love everything J.D. Raymond ever sent me. I am not entirely sure if he’s up-armed the Terror’s sidekick Sarah Johnson or switched the Terror’s sex.  I don’t argue with nice drawings, no matter what I may have instructed. Beyond being a striking image, I also own the rights to this thing flat out. My problem is, no matter how I color this, the thong battle armor is going to get my retailers in needless trouble. I’m demoting this to a prominent interior placement. Our current cover girl Sarah is actually modeled off of this illustration. 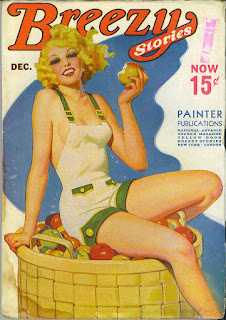 I have numerous interior illustrations in the game which show Sarah barefoot for no explained reason.  Our current cover hides her feet. I should have told the artists it was ok to invent shoes for her. Pulp fiction didn’t provide us with too many dangerous women, so we invented one. 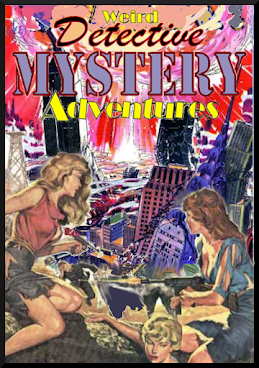 No one could be more dangerous than the three women on this concept collage. Having just set off a tac nuke in NYC, they’re busying themselves gunning down survivors. I am going to commission this to an artist, although I am not sure what I am going to do with it. Like the J.D. Raymond illo above, I may use the final commissioned image on promotional t shirts as opposed to covers. The dystopia and space opera expansions are more pipe dreams than works in progress at this point. I believe that I am going to have the girls rendered either in Japanese animation style or something approximating the style of Dan DeCarlo. (Betty, Veronica and Sabrina Take Out New York. Something along those lines, but not close enough to sue my stinking, worthless ass.) This GNU manipulation uses a cover image from the old Ace Comics Atomic War in the background and three WWII Pulp War babes from an old sweat in the foreground. The breast slip on the left figure makes it a no go as a production design.

The following are public domain works which I stuck a logo onto. The intention is to illustrate the type of genres covered by the Weird Detective Mystery Adventures rules set. 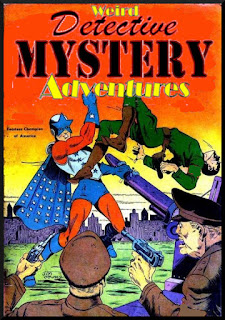 I always liked Captain Courageous. The character design seems to have driven the publisher’s colorists crazy. The light blue, dark blue motif proved too difficult for them to follow consistently. The best version of this character depicts the middle forehead region of the star mask as translucent, so that you can see the Captain’s expressive eyebrows. This is one of those character concepts that devolved over time. Initially the character was called Captain Victory and had a well thought out backstory and niche as a secret agent for the diplomatic service. Then they scrapped it in favor of a different mask and new name and the same backstory they were using for the Unknown Soldier—that of some sort of disembodied spirit in patriotic tights. And then this person with no name and no secret identity gives up the tights to become a naval officer. Some editorial choices are mystifying. 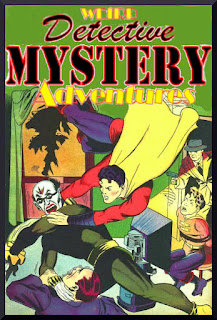 I am fond of picking on Ace Comics, since their cover renderings are usually fairly straight-forward.  We used this cover, with some adaptation, for the prototype of our first print version. I got so many comments as to what Magno’s sidekick was being shown, that I decided to crop him out of the composition. (He was being made to watch educational television. I think the original intention was that he was being bombarded with x-rays or some other ray-like-thing. Modern eyes make the scene far more suggestive.) We have included the Clown in our Warlords of Wonderworld NPC listings. He was a combination of Lex Luthor, the Joker, and Bizzaro. Although Magno’s entire career was spent chasing the Clown around, readers got the impression that the majority of the Clown’s activities went undepicted. 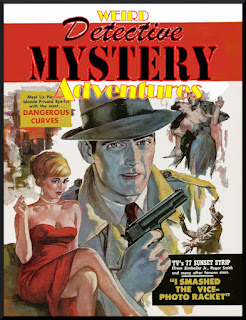 By the time this magazine came out, the hardboiled detective genre had been in parody mode for almost 30 years. This was more about the evolution of our logo design than anything else. I like it as a collage pattern. The illustrations themselves seem more appropriate in style to a lawnmower repair manual.  It is a nice parade of cliches. 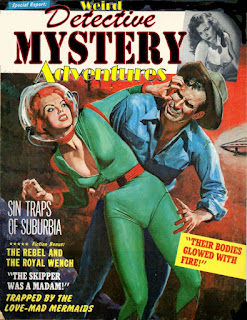 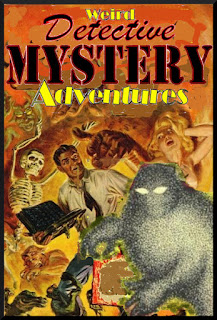 I’m not particularly proud of my efforts here with this collage. And I am not quite done. Eventually I am going to start over and see if I can reposition some of the elements. I only threw it up because it is at least striking at first glance. Again, I would have to have it redrawn entirely in order to be useful.

Updates and further WDMA content will become a continuing feature of this blog. We will reveal the mysteries of the Vortex of Cute only when the time is right.

Posted by Ajax Telegraph at 4:40 AM