It is my sad duty to inform you that I did not win the billion-dollar Mega Ball Plus lottery held this past Saturday, although I did used to live in Des Plaines where the life-changing ticket was purchased.  Neither did Brave Sam, who still lives in Des Plaines. I’m thinking that living in Des Plaines is a lot less intolerable when one has a billion dollars.  But I will never know. (It could be worse. I could live in Oildale.)

I am sad to say this, but this last lottery loss is part of a very bad and very long string of defeats I have suffered in my gambling history. To wit, I have never won. I have never won anything. This strangely makes me believe that I am due and thus feeds my sporadic occasional petty wagering frenzy. At this juncture it seems that I should plan to content myself with an economic fate predicated upon the sweat of my own brow. Shameful as it may be, it seems my only doable option.

I will be at GENCON this coming weekend, running four SOLD OUT demos of our fine Weird Detective Mystery Adventures role-playing game. For a time, I will be sharing the sacred astroturf where greats such as Barney Rubble/Andrew Luck once tread. (You will note that Andrew Luck and Barney Rubble have never appeared anywhere together. Although this may not utterly sell my contention that they are in fact one-and-the-same person, it is incredibly suspicious—if you exclude the assertions that Barney Rubble is a cartoon character from the 1960s and that Andrew Luck was born in 1989 and is already retired. I swear they are the same person.) I intend to honor this sacred playing surface by giving the utmost to my preparation, which has included a previous scrimmage of my game plan at DIECON last month. I intend to be in mid-season form by my kick-off at 8:00 AM on Saturday. 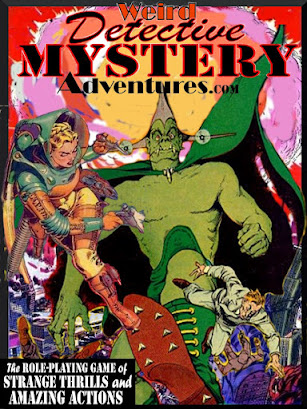 Our other promo thingy, Weird Detective Mystery Adventures (the movie) TM, is currently still in post-production.  I am in the process of obtaining a new score or going with Flight of the Bumblebee and calling it a day. Its majestic opening is planned for my web pages and perhaps YouTube once this amazing feat has been accomplished.

A print Ad or two may also be in the offing once I can come up with one. (Still getting over my billion-dollar lottery loss, so this may take a little time.)

If you are not one of the perhaps 30 people slated to join us at GenCon, we will be at Printer’s Row Lit Fest and the Southside Comic Book Convention in September. After that, our tour is going on hiatus until probably February. We intend to have a strong Spring and Summer schedule next year. We may even play the Colts! (Not as a group, inasmuch as WDMA is really only suited for 5 to 7 players.)

Posted by Ajax Telegraph at 1:02 PM